Last week, the first Congress of People’s Deputies from Russia was held in historic Jabłonna, Poland, in the very building where the famed roundtable talks between the Solidarity Movement and communist authorities were held in the 1989. Deeming the current Russian government leadership to be illegitimate, the congress brought formerly elected Russian political leaders together to create a neo-shadow government which would lay the groundwork for a legitimate government following Russian President Vladimir Putin’s eventual removal from power.

However, this congress was not a civil society conference or roundtable. As American publication The Daily Beast earlier described the event in an article titled “Russian Enemies of Kremlin Meet to Plot Violent ‘Elimination’ of Putin,” the sentiment of those attending was that there is an urgent need to take all measures to physically remove Putin from power, now, and to prepare for the post-Putin era.

Among the delegates who spoke to the Kyiv Post was Andrey Sidelnikov. Before being forced to flee Russia due to his activism against Putin, Sidelnikov had been a close confident of famed Russian opposition leaders Boris Berezovsky and of Boris Nemtsov – both of whom are alleged to have died per the orders of Putin.

Now heading the international opposition movement Speak up! in London and spending time in Kyiv, Sidelnikov said that it was clear that “the war in Ukraine and the prevention of war in Europe can only happen if we are committed to removing Putin and his regime from power.”

This congress was of great importance, stated Sidelnikov, as it was the “First introduction of parliamentariasm into the future government of Russia. How it will finally look in Russia we do not know, but the first step is to create a legitimate authority and democracy.

“Secondly, it is important that this democratic movement is founded without political parties and is open to all. The idea is that we lay the foundations of democracy now.” He adds that “the next Congress is being planned and we will consider what will be the laws. I don’t say ‘the new laws of Russia,’ as we do not know what will come of Russia – the geographic country.”

The Russian activist highlighted that an important step would be laws regarding “lustration and the removal of people who were supporting the Putin Regime. We need to write new laws for the transformation period which Ukraine must go through. The preperation of free and democratic elections is an important responsibility.”

The event, which was strongly pro-Ukrainian, issued a final communique stating that the congress is “ready to coordinate on behalf of Russia to work together to identify and punish those responsible for war crimes in Ukraine, as well as to implement an effective sanctions policy against Russian citizens responsible for unleashing and waging hostilities. We also ask you to inform us of the Russian assets arrested on the territory of your country and the sub-sanctioned Russian citizens in order to unblock them as soon as possible for use in restoring the economy of Ukraine, which suffered from the aggression of Putin’s regime.”

Ilya Ponomarev, one of the founders of the congress said that, “People complain that we are rushing – all the contrary: We are too slow. Everyday hundreds are dying in Ukraine. Every day our comrades remain political prisoners in Russian jails. Every day, more who burn for truth, like Nemtsov and Politkovskaya are murdered,” reflecting that the only solution is that, “Putin’s dictatorship must end.”

When Ponomarev was asked what the relationship was between his congress and other well-established Russian opposition organizations, such as the Vilnius-based Free Russia Forum of Garry Kasparov, Ponomarev responded that, “We like the Vilnius Forum of Free Russia. They are the largest political discussion platform and I even helped to establish it,” continuing that, “We all still consider all of the people from the Forum to be our friends, despite the fact that most of the Forum’s participants probably tend to disapprove armed resistance to Putin, which I think is a necessity.”

Ponomarev explained that the congress in Warsaw is “not competition for the Vilnius forum” as the congress is “not a political organization, nor a forum,” rather it is “a proto-parliament to become the full-fledged one in the moment of change. And it has – as all parliaments do – representatives of different views and approaches. In its first session the congress laid down the rules, at which conditional resistance is legal; and praised everyone who acts within the rules, which the Vilnius forum most certainly does.”

An important conclusion of the congress was the formation of an Anti-Authoritarian Union to oppose Putin’s totalitarianism. Among the initial co-signers were representatives of Tajikistan, Chechnya, and Russia. Congress organizers said that Turkmen, Kazakh, and Georgian officials were expected to sign the charter in the near future.

Based upon the Kyiv Post’s conversations with Central Asian and Belarussian activists present, countries that had formerly been part of the Soviet Union, now living under Putin-backed dictatorships, realize that now is the time to join forces against the Kremlin’s sponsorship of their local dictators.

Dmitry Bolkunets, a Belarussian opposition political expert, told the Kyiv Post that now is the time to unite forces with the democratic oppositions from other post-Soviet countries as, “Right now, the dictators across the former Soviet states are weak. This is true in Belarus, too. Popular sentiment strongly opposes Belarus involvement in the war in Ukraine, and Lukashenko knows that his own people may turn against him. If all of the former republics begin pushing against their Moscow-backed dictators, together, now in unison, we have the real ability to create a democratic shift across the region.”

The young Belarussian activist contends the democratic nature of the congress was aligned with what many in Belarus’s democratic opposition had been saying; namely that, in the case of Belarus, it is worth testing online elections to create a legitimate representative body.

“Elections are an opportunity to consolidate the population and democratic forces. The success of online elections in Belarus will make it possible to develop it on a larger scale at the next presidential election in Russia in March 2024. If the society does not trust state institutions, then the civil society should take responsibility for organizing fair elections in parallel to what the government does.”

The date of the next congress has not yet been set, but organizers promised that it would be consistently growing in size as the increasingly clear need of removing Putin from power grows.

The views expressed are the author’s and not necessarily of Kyiv Post.

EURACTIV: Anti-Kremlin Russians gather in Poland to discuss how to ‘eliminate’ Putin

No comments to show. 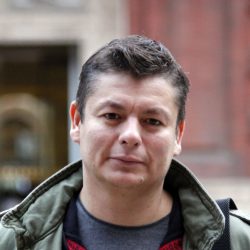 Born in Novosibirsk, an electronics engineer. In 1990 he wasRead More Caesar head of the Legion of Free Russia

Lieutenant colonel and speaker of the Legion “Freedom of Russia”,Read More

Gennady Gudkov is a Russian politician and businessman. The MoscowRead More

llya Ponomarev is a politician and technology entrepreneur, in 2007-2016Read More Deputy Chairman of the Council of Deputies of the KrasnoselskyRead More

The Congress of People’s Deputies